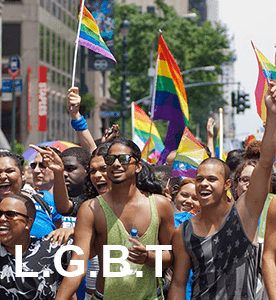 A black woman perspective of self acceptance, living and loving as a lesbian

On the face of it I appeared the same as my friends growing up in Black Britain in the 1970’s.  I enjoyed playing the popular games of that time hopscotch, kiss and chase but most all I enjoyed the freedom of riding my brand new red hot chopper bike again and again down the uneven streets and downhill at the local park that my beloved mother had brought me as a surprise for my 13th birthday. My hairstyles went from plaits, afro to curly perm.  My brightly coloured red, gold and green Rastafarian hat that I wore proudly became a temporary part of my attire.  My clothes were a joint reflection of the era and captured my personality – pencil skirts to my much favoured flare trousers and tight jeans.

As the growing years manifested – my body began to change, in tune with the seasons.  From the early years I knew that I was different from my peers.  The crux of it I was very much attracted to girls and they were besotted with boys.  Nervously and jokingly I had rehearsed how I would say to my family and friends that I am a lesbian! I questioned over sleepless nights where would I start? This episode in my life was very distressing and a personal challenge that fluctuated like a fairground ride between highs and suicidal thoughts! Over 3 decades later it’s far easier for me to say: “Same sex! Yu nuh fe vex!” However back then I felt imprisoned by my sexual orientation so I remained silent. The enormity of this confession was far too much for me at such a tender age to divulge. I pondered was my sexuality something innate within me or whether deep down if I prayed for my sins to be forgiven that God would make me straight. I fell asleep as a lesbian and awoke a lesbian. Nothing changed. I was still the same – funny, creative, miserable, had teenage spots, and ate far too many sweets. I absolutely knew back then I was different because I kissed girls and I liked it.

Sitting down with my school friends we talked about the usual topic clothes and boyfriends. Not one of my friends showed any interest in same sex relationships. When I plucked up the courage, albeit in a humorous manner to say to my friends that I thought that girl’s were nice in a sexual way the usual respond in reality and even the safety of my own dreams was met with  disgust and dismissed as a childish flaw never to be revealed again.  To actually mention ‘lesbian’ or ‘gay’ was as if I had just said the most repulsive swear word or committed a serious crime. Therefore to actually come out and say that I was a lesbian at 12 years old I felt I would probably be lynched and be a social outcast.  These stereotypical outcomes I had portrayed in my mind were actually just my perceptions.  “Same sex! Yu nuh fe vex!” this is the attitude I have adopted which has served me best over the last several years as I have seen the progress through active campaigns to give same sex people equality and justice which is our human rights.  I have seen the beauty of lesbian women not just existing but living life to the full.  I can now celebrate the fact that I am finally free to be me.  It’s absolutely a fantastic feeling.

Did you know that the dictionary definition of sexual orientation states ‘a pattern of emotional, romantic, and/or sexual attractions to men, women, both genders, neither gender, or another gender.’ It further adds ‘a person’s sexual orientation is defined by the gender to which he or she is sexually attracted. Someone who is attracted primarily or exclusively to members of the same gender is characterized as gay or homosexual, though the latter word has largely fallen out of use’. Regardless what the definition is or what you fall into some people have no difficulties been ‘out’ and others like me struggled because some people are vexed, see same sex relationships as a ‘sin’ but I encourage you not to be. “Same sex! Yu nuh fe vex!”

Being a black lesbian woman from a Christian upbringing added to my personal fear.  For me a 60’s child of Jamaican parentage I didn’t feel like I had anyone within my own background that was openly gay or a lesbian that I could relate to. No direct role models. I certainly didn’t want to be the first lesbian in a small multi cultural town. So I remained silent and conformed towards the norm.

Growing up the media representation and derogatory terms such as ‘batty bwoy’ which is still part of 21st century attitude, homophobic lyrics linked with homophobic bullying and ridicule did nothing to make me want to come out of the closet.  It continues to hurt me when negative and derogatory terminology is used to support or give emphasis towards how bad someone is. I don’t want to be solely judged by my sexual orientation. Equally, I do not judge a straight person purely by the fact that they are heterosexual! This would be narrow-minded to say the least. If I am going to be judged let it be on my values and character; the input I have made as a mother as well as to the community itself.  In truth, not because I might prefer Whitney Houston instead of Will Smith or I prefer swing to pop, reggae to calypso this doesn’t make me less of a person.  It makes me an individual. “Same sex! Yu nuh fe vex!”

May I remind you readers of my mantra, “Same sex! Yu nuh fe vex!” Being a lesbian is not the definitive thing that makes me me it’s a part of me.  For me heritage, ethos and essentially my faith makes me a whole person.  These aspects all play an integral part in the uniqueness of oneself. Me!

I have no regrets about this journey in my life and the beautiful relationships I have formed with women and men. The latter produced my one and only beautiful daughter who simple and unconditionally loves me for me.  I am surrounded by a wonderful circle of family along with true fiends who I give God daily praise.  They have supported me completely through different amazing stages of my life – thank you. Now I can finally celebrate the fact that I have found inner peace. I have buried the demons that imprisoned me and this is my bittersweet story with the weeds plucked and destroyed.  Thankfully my life is now seasoned with the flavours of the Caribbean and the colours of the rainbow. I can now look back without anger. I have had a lot of experiences along the way that I often share with family and friends with the intention to get them to explore for a moment aspects of my life. Because after all “Same sex! Yu nuh fe vex!”